skip to main | skip to sidebar

On December 13, 2009, during the Worldview of Islam Seminar organized by the Assembly of Muslim Intellectuals or Himpunan Keilmuan Muda (HAKIM), there was a question being posted to Professor Al-Attas regarding the polemical usage of the word "Allah" by the non-Muslims.

Below is the transcript of his brief-but-yet- concise enlightening remarks. As a word of caution, though, one must not only rely on this brief transcript alone to understand the whole spectrum of Prof. Al-Attas' view about this theological matter. Further thorough elucidation of his thought can be found in numerous works of this great Muslim scholar of this age, such as Prolegomena to the Metaphysics of Islam, Islam and Secularism, Islam dalam Sejarah dan Kebudayaan Melayu and A Commentary on Hujjat al-Siddiq of Nur al-Din al-Raniri. 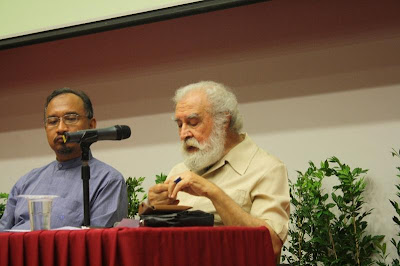 Prof. Wan Mohd Nor and Prof. Al-Attas during the special lecture in the seminar last year.

Question: The using of kalimah "Allah" by other people in this country
Answers by Prof. Syed Muhammad Naquib Al-Attas:

Well I have been talking about this long time ago. I remember about this in ISTAC, when we first established ourselves (late 80's and early 90's), I think the Arcbishop of Penang was asking this question. And I have answered that.

And I said, "Why you want to use the word 'Allah' for yourself?"

They said "we going to pray in Bahasa Malaysia "

Ok, so they said they want to change so that it more patriotic. Then in that case I'm saying that "why don't you use Tuhan while praying in Bahasa Malaysia ? Because you are talking about God isn't it?...God is not just a name..."Allah" is a name of this Being whom you called God... and in fact a Being whom even higher than what you called to be God"

And then I said, " ...and "Allah" is not from Bahasa Malaysia . It is not a national language. It belongs to the language of Muslim all over the world. Therefore your argument using this for the word "Allah" does not fit into your idea of God. Because "Allah" does not have a son, It is not one of three (Trinity), that is why out of respect to Allah we can't allow you to use this."

But when we Muslim, when we write in English we say God, or when we talk to people we say God but we mean "Allah"...but they cannot say when they speak about God it means "Allah" as they don't mean it.

We agree you want to use God, then use Tuhan as we also use that...but we understand in the Malay language that Tuhan is not a translation of Allah..that is why we say "tiada Tuhan melainkan Allah" not "tiada Tuhan melainkan Tuhan". We don't say "there is not God but God"..at least the ulama' among the Muslim Malays, we understand what is the meaning of that (word "Allah").

So "Allah" cannot be translated as no language has translated Allah. The Arabs themselves they only use that after Islam..although the word existed (before)..the Christians Arab they also did not use Allah (in theological, epistemological and ontological sense in the same manner as the Muslim)..if they say that it is just a language..they talking about language..because they say "Allah" like the Muslim when they (melatah)...

So it appears they want to do that in order to confuse the Muslim into thinking that all the same..that is why I say one of the problems about religion is the nature of God..about who Allah is..that is why in Arkanul Iman (The Pillars of Faith), the first thing is "amana billah".

"Who is this Allah?" and that need to be explain at higher institution in a proper way...

So we have answer the question. It is not proper to allow them using this, since they asking us and there is no point bringing this to court since this is not a matter of court to decide it whether they have the freedom to use it or not. It is up to the Muslims.

But then if they used it and said "in Indonesia they have use it, why can't we?"...but it is because of the Muslims..if Muslims don't care they will go on and use it..and in Indonesia they are using not only that, other things they even call it "choir" as "selawat". Choir is not a "selawat", as "selawat" is for Prophet..it's not singing hymn..

They (the Muslims in Indonesia ) seem not to bother about this. What we can say is that ultimately well they say "God is not Allah"...well if you want to use the word God, we are saying we also use the word God, we refer to Allah as we know and we are not saying that your God ultimately will not refer to Allah. You can't run away from Allah. You can only escape Him and so in the Qur'an (surah An-Naas) says: "Qul aAAoothu birabbi annas, Maliki annas, Ilahi annas". He (Allah) is saying " I am the real Ilah (God) of naas (mankind)", although mankind (non-Muslim) does not interpret it that way.

My comments:
If that is the case, that shows how persistent were the Christians in finding the loopholes be it in legal or cultural dimension to further their cause that might create confusion to the Muslim's polity if not being mitigated by the governing authority of this land.

As I iterated before, by having confused so-called Muslim authorities which normally appear in the silhouette of Salafism/Wahabbism as well the Modernist/Reformist (actually they are just the two sides of the same coin), the "public sphere" itself has been flooded with confused views which do no good to the Muslim's cause in defending their creed from blasphemy.

It is best to leave this matter to the Muslim scholars who have been trained as Theologians (mutakallimun), that possessed in depth understanding on Islamic Theology, Islamic and Western Philosophy as well knowledge about the Western Civilization (which Christianity is one of the mosaic part of the whole picture) to deal with this issue succinctly.